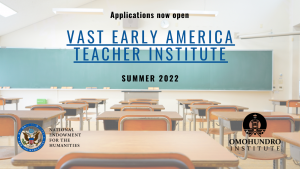 What, where, and when is “early America?” On what is our nation founded? As the United States prepares for the 250th anniversary commemoration of American independence in 2026, we look for ways to connect our current experience of nationhood to our early history, and to help educators find historical themes that will connect the Revolutionary era with their diverse and often conflicted communities.

The historical scholarship of the last decades reveals a layered picture of the full geography of the contemporary United States as well as its early modern Caribbean and Atlantic context. Historians have researched and written the early American histories of the Gulf Coast, Texas, and Southwest, California, the Pacific Northwest, the Rocky Mountains, the Midwest, and the Mississippi River Valley, complementing a traditional focus on New England, the Mid-Atlantic, and Southeast. The foundational Native American histories of these places as well as the impact and influence of European travelers and settlers, and of the enslavement of Africans, all continue to reverberate today.

While the totality of Vast Early America is, in fact, impossible to convey in any single institute, the 2022 workshop “Teaching the History and Culture of Vast Early America”—or Vast Early America Teacher Institute (VEATI)—will introduce 25 teachers to this capacious view of early America via deep dives into case studies and through lectures by the resident faculty and visiting scholars. To provide participants with a range of subjects covering Native American, African American, and European settler histories as well as the connections among them, the case studies of early American Texas, California, Arkansas, the Caribbean, Virginia, and the American and Haitian revolutions will be developed both in lectures and through secondary and primary sources readings.

While in residence in Williamsburg, Virginia, VEATI participants will complete a research project on the early America of teachers’ own home communities for use in their classrooms.

The two-week institute will bring teachers to Williamsburg, Virginia, from July 3 to July 17, 2022, to explore early American history and research tools. Lectures, seminars, and primary sources available online, many of them newly available, as well as documents and artifacts found in physical archives and museums in Williamsburg-area collections including Colonial Williamsburg’s Rockefeller Library, William & Mary’s Swem Library, the Jamestown Rediscovery Museum, and the Pamunkey Indian Museum, will give teachers a powerful platform for connecting the past to the present when they return to their classrooms and communities.