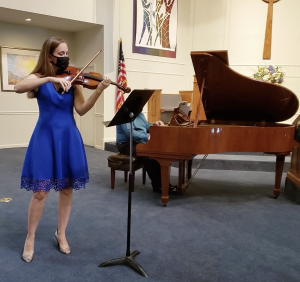 An Afternoon of Chamber Music

The Bach Parley String Academy presents the return of “An Afternoon of Chamber Music” with Megan Lineberry Sahely, violin and Galen Dean Peiskee, piano. The program will open with Schubert’s Violin Sonata in A major, D 574, also known as the “Duo.” The second half of the program features Grieg’s popular third violin sonata in c minor. This is a benefit concert for the Bach Parley String Academy Scholarship Fund and will feature works by Schubert and Grieg. The concert will be presented at 3 PM on Sunday, October 11, streaming at http://www.bachparley.org/. Donations are appreciated and will benefit the Bach Parley String Academy's scholarship program. Violinist Megan Sahely performs regularly as a soloist, chamber musician, and orchestra member across the southeastern United States. She holds positions with the Tallahassee Symphony, the Pensacola Symphony, the Columbus Symphony, the Northwest Florida Symphony Orchestra, and Sinfonia Gulf Coast. Dr. Sahely earned her Bachelor's of Music Education and Bachelor's of Music Performance degrees from the University of Kentucky and earned the Master and Doctorate of Music from Florida State University. In addition to her performing activities, Dr. Sahely maintains a large private violin and viola studio as a faculty member with the Bach Parley String Academy. A proponent for string education in public schools, she has taught at the John F. Kennedy German-American School in Berlin, Germany, Edythe J. Hayes Middle School, Bryan Station Middle School, as well as her current position as Orchestra Director at Raa Middle School and Leon High School. Dr. Sahely plays on an 1873 Honore Derazey violin with a modern Lee Guthrie bow. Galen Dean Peiskee has established a multifaceted career as an accomplished chamber musician, soloist, orchestral pianist, choral accompanist, and vocal coach. He has performed throughout the United States and internationally, and he is a founding member of both the Young-Peiskee Flute-Piano Duo and the Cerulean Trio. Peiskee made his Carnegie Hall debut in May 2017, performing music of Timothy Hoekman in Weill Recital Hall. Peiskee has a Doctor of Music degree in Collaborative Piano from Florida State University, where he earned his Master of Music degree in Accompanying.

All donations benefit the Bach Parley String Academy need-based Scholarship Fund - donations may be made at BachParley.org/StringAcademy. A $10 donation is suggested.