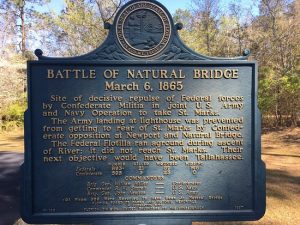 Natural Bridge is the site of the second largest Civil War battle in Florida and where the St. Marks River drops into a sinkhole and flows underground for one-quarter of a mile before reemerging. During the final weeks of the Civil War, a Union flotilla landed at Apalachee Bay planning to capture Fort Ward (San Marcos de Apalache Historic State Park) and march north to the state capital. With a timely warning, volunteers from the Tallahassee area – Confederate soldiers, old men and young boys – met the Union forces at Natural Bridge and successfully repelled three major attacks. The Union troops were forced to retreat to the coast and Tallahassee was the only Confederate capital east of the Mississippi not captured by the Union. A reenactment of the battle is held at the park every first full weekend in March. A monument at the site honors the Confederate soldiers who defended Natural Bridge. There are picnic and fishing areas surrounded by woodlands for a comfortable place to relax and reflect back on Florida’s history. Guided tours are available upon request.