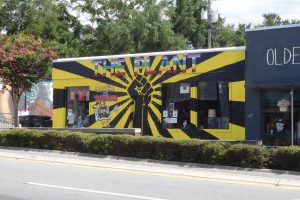 In response to the killing of George Floyd, The Plant Facade mural was organized, designed, and painted by a collective of local artists and activists including Nathan Hendrickson, Brian Damage, Shelby Manray, Chris Anderson, Riley Dennis, and Warren Sylne.

Nathan Hendrickson wrote:
“George Perry Floyd, Jr. (October 14, 1973 – May 25, 2020) was a black American man killed by police after allegedly passing a counterfeit $20 bill at a convenience store in Minneapolis, Minnesota. Moments after police handcuffed him, he was removed from a police vehicle, forced to the pavement and restrained by two police officers in the middle of the street; during the altercation a third white senior officer, Derek Chauvin, knelt on George Floyd’s neck for nearly eight minutes until he could no longer breath and his life was taken from him. After his death, protests against police violence quickly spread across the United States and internationally. We recognize the connection between the current struggle for racial justice and the need to reckon with our government’s brutal colonial history, which includes the current custodians of dubious policies that value the likes of property over people and capital over common good. Defunding the police is about much more than simply dismantling law enforcement. It’s about holistically reimagining what public safety is and reinvesting in communities that have been unfairly brutalized in the name of “law and order.”  It’s time we restore power to the people, abolish citizens united, dismantle the prison industrial complex, criminalize fossil fuel extraction and act swiftly to save our increasingly uninhabitable planet from the brink of extinction. We think of The Plant as an inclusive and safe space to organize, honoring the freedom of assembly. The colors of the facade signify solidarity with LGBTQIA+ rights, the poor people’s movement, restoring bargaining power to workers, and Black Lives Matter.”