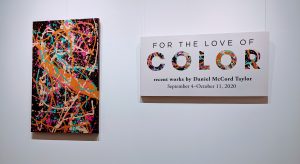 For the Love of Color is an online and physical gallery show with brilliantly colorful work by Dan Taylor. Meet the artist on September 12th, 1-5 to have an informal chat and view the exhibition.

Meet the artist Daniel McCord Taylor for an informal chat and view the solo show. Venvi Gallery welcomes back Dan Taylor, a four-time winner of Artopia’s “People’s Choice Award”. Influenced by abstractionists such as Gerhard Richter and Jackson Pollock, Taylor has an innate curiosity and impulse to experiment in his art. Since he began painting eight years ago, he has typically worked with oil paints, applied with a palette knife. Yet, in putting paint to canvas, he has also been known to repurpose everyday household items, such as straws and bottle caps. His atypical methods result in unusual textures and shapes that help tell the story of the painting. Color too plays a crucial role in Taylor’s artistic expression. Self-professedly “beholden to the flow of creative juices,” Taylor says he only works “when the inspiration strikes him,” and it is often color itself that serves as a catalyst. In particular, the brilliant combinations of colors he sees in nature, from the “vivid memory of a Mexico Beach sunset” to “the intense yellows and oranges of roadside wildflowers,” stir his imagination. And, while the last few months leading up to the new show have often “amplified” the elusiveness of inspiration, Taylor notes that “when the inspiration came, it was bigger and bolder”—and even “more colorful” than his previous work. The paintings in “For the Love of Color” continue Taylor’s unique and expressive use of color, but also derive from some new strategies, and a new perspective. In them, he moves beyond his usual oil paint to incorporate acrylics, which have “present[ed] new opportunities (and challenges)” as well as “rewarding” results. In terms of process, “For the Love of Color” represents the artist’s attempt to be “more open” and “freer,” while suggesting the coincidence of spontaneity and introspection. In “6,500 Light Years Away,” a complex knit of pink, brown, beige, white, and blue paint is concentrated along the diagonal axis of the canvas. Sprinkles of color spread from the center, producing the illusion of dynamic outward movement. This painting, according to the artist, is a “look back over [the] shoulder at the (infinite) past,” as well as a depiction of a “faith in the future.” It is an important one for the show because it communicates a hopeful “look ahead at what may come.” The show also touches on the tension between chaos and order that exemplifies contemporary life. For example, perhaps the most successful painting in the series, “Boom! Pow! Bang!”, features many frenetic droplets of light colors on a dark teal background. The eye is drawn, however, to a set of three larger splatters of white paint, which are, with evident deliberation, accented with proportionate dollops of peach and mustard. In a meeting of artifice and impulse, the arranged splatters appear to make up the points of a horizontal triangle. An online and physical gallery show with brilliantly colorful work by Dan Taylor. This show will be up in the gallery from September 4th through October 11th. You can also access it online by visiting www.venviartgallery.com.