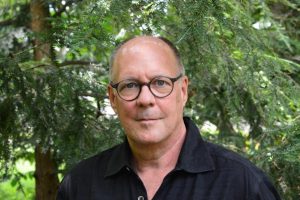 Join us for a poetry reading from David Baker as part of the Georgia Poetry Circuit.

Join us on the Forbes Campus, in Smith- Bonvillian Hall, in Flowers Auditorium for a poetry reading by David Baker!

Though he is known primarily as a poet of the Midwest, David Baker was born in Bangor, Maine in 1954. He spent his childhood in Missouri and attended Central Missouri State University before receiving his PhD from the University of Utah. Baker is often described as a poet of place, indebted to the American Romantic tradition of Emerson and Whitman, as well as Frost. Baker’s collections of poetry include the widely-acclaimed Changeable Thunder (2001), Midwest Eclogue (2007), Never-Ending Birds (2009), and Scavenger Loop (2015). He has won fellowships and awards from the Poetry Society of America, the Pushcart Foundation, the National Endowment for the Arts and the Guggenheim Foundation. Currently a Professor of English and the Thomas B. Fordham Chair in Creative Writing at Denison University, Baker is also the editor of the Kenyon Review. For more information visit, https://www.poetryfoundation.org/poets/david-baker.