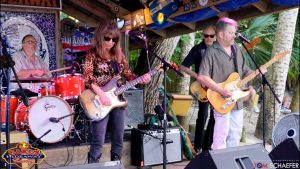 A band whose legacy includes members who come from the groups of Memphis Charlie Musselwhite, Luther Tucker, Evan Johns, Big Joe Turner, Elvin Bishop, Gladys Knight, and Brewer Phillips is hard to overlook. You haven’t heard of them yet? Understandable.

The rhythm section, Col. Bill Singletary and Walter Shufflesworth, bass and drums respectively, come from a long history of performing and touring out of San Francisco California. Both were long-time members of The San Francisco Dynatones who recorded for numerous labels including Warner Brothers and Rounder.

From Austin Texas come the two burning lead guitar players, Mark Korpi and Lil’ Lin. Both trade lead guitar duties and share the vocals. Mark comes from the Washington DC area, where he was performing with Danny Gatton, touring the east coast. Soon, regular stays in Chicago led to performing with Brewer Phillips and a host of others eager to sit in with Brewer and the band. Next Mark moved to Austin Texas, as a member of Evan Johns & the H Bombs. While touring and recording with Evan, Mark became a studio favorite, recording with many of the artists in the Austin scene at that time.

Lil’ Lin was born and raised in South Africa. As a young girl, Lin spent nearly every day with her bonus mom, “Big Fat Annie,” a full blooded Zulu who schooled Lin in the “behind the beat” rhythms of her people. At the age of 13, Lin brought those rhythms with her to the USA when her family moved to New Haven Connecticut.  Lin didn’t stick around home too long. After a couple years, Lin heard “the call of the road” and ran away from home. Bouncing around the States for a couple more years, she gravitated to Austin Texas. While a mainstay in the Austin scene of the early 90s, Lin falls in with Keith Ferguson and later Gene Taylor, both of Fabulous Thunderbirds fame, and they start performing together. Through this association, Lin was discovered by Clifford Antone, whose encouragement led to a three year stint fronting her own Thursday night house band at world-famous Antone’s Club of Austin. During this period, Lin successfully toured Europe three times.

Fast forward to 2017. The aforementioned musicians are living in the Cocoa Beach Florida area. Bill and Walter fall into a jam session at The Beach Shack, hosted by Mark and Lin. After a couple more “sessions”, Lil’ Lin says “these are the guys.” Last piece of the puzzle is Ki Capitano, keyboards and vocals, who was also recruited from the “Beach Shack jams”. Ki is also from Washington DC. He has performed with many “Beach Music” bands around the East Coast and from the Richmond and Memphis areas.

Unkle Dirty is formed around the slashing lead guitar and heartfelt vocals of Lil’ Lin. Even with most of the attention at live shows being focused on Lin, this is truly a group effort. Mark, Ki, and Walt all sing and write. This band brings an exciting

presentation with a lot of history. Like the old R & B posters used to announce . . . “Show and Dance.”

Unkle Dirty and Lil’ Lin are ready to take the stage!  Are you ready?

Advance Discounted Tickets: $20.00 with a table reserved in your name.