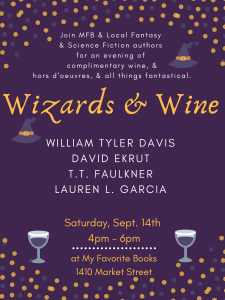 We cordially invite you to our Wizards & Wine event on Saturday September 14th!

Enjoy the complimentary wine and hors d'oeuvres while having a one-on-one conversation with one of these word-wizards in a relaxed environment! Share with us your all-time favorite fantasy author or science fiction novel, and tell us what you’ve read most recently. All used sci-fi and fantasy books will be 20% off for the event.

After leaving the Shire, William Tyler Davis was an exchange student at Hogwarts School of Witchcraft and Wizardry. Sorted into Ravenclaw house, he spent many years there before taking time off to companion the Doctor around space and time. He eventually completed his first novel, Hero in a Halfling: A Humorous Fantasy Adventure (Epik Fantasy Book 1), about Epik, a Halfling who simply wants to be a wizard.

Dr. David Ekrut was raised in a small community in Arkansas, where the abundance of nature fostered his imagination. Whether lost in a book, table-top gaming, or roaming the countryside from coast to coast, expanding his mind inevitably led him to the craft of writing. His scientific expertise has aided in creating physically believable fiction with rules and structure to bring his universe to life. Taming the Elements: Elwin Escari Chronicles: Volume 1 is David’s first novel.

T.T. Faulkner is a super hero. A super hero of words, that is. He saves lost words before they're devoured by some netherworld being that enslaves letters, and forces them to spell profanities for all eternity. But while he is a superhero, he is also an excellent cook. However, it’s not food that he heats up. It’s his plots! His latest novel, Anya's Ocean, is a modern retelling of Lord of the Flies with a few surprising twists.

Lauren L. Garcia has been a storyteller all her life. She started writing down her stories at the age of twelve; two decades and over two million words later, she’s still going. Her debut is Catalyst Moon: Incursion, the first book in a fantasy-romance series where magic is new and a mage rebellion is on the horizon. Lauren’s hope is to create a fantasy world of dazzling breadth, so stick around. The fun is just beginning.