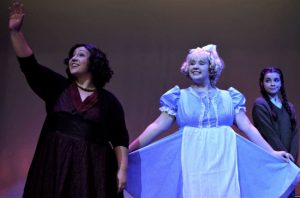 Gypsy at the QMT

Gypsy, is considered one of the top musicals of the 20th Century. Based on the 1957 memoirs of Gypsy Rose Lee, the famous striptease artist, and focuses on her mother, Rose, whose name has become synonymous with “the ultimate show business mother.”

The story follows the dreams and efforts of Rose to raise two daughters to perform onstage and casts an affectionate eye on the hardships of show business life. The musical contains many songs that became popular standards, including “Everything’s Coming up Roses”, “Together (Wherever We Go)”, “Small World”, “You Gotta Get a Gimmick”, “Let Me Entertain You”, “All I Need Is the Girl”, and “Rose’s Turn”.

Gypsy, in my opinion, director Keith Maccia said, is one of the greatest musicals ever written for the stage. From its incredible book by Arthur Laurents and beautifully written music by Jule Styne and lyrics by Stephen Sondheim you can’t find a musical more perfect than this one, and to top it off it is based on a very dark true story of a vindictive stage mother who will do anything for her two daughters, June and Louise. This show has been a dream to direct ever since I saw Patti LuPone Play Rose in the 2008 Broadway revival of this show.

Gypsy is choreographed by Jacob Arnett with music direction by Bradly Gay and stage managed by Madison Metcalf.

Parking is available on the street abs in assigned lots during events.