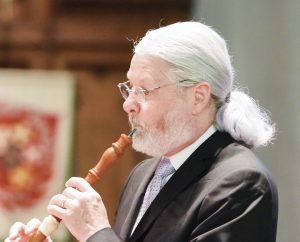 For the Bach Parley’s first concert of the season, the period instrument players welcome guest artist John Abberger, oboe. The concert will include the beautiful Brandenburg Concerto No. 3

The Tallahassee Bach Parley will begin their 38th concert season with “Altogether Bach,” featuring instrumental and vocal works all by J. S. Bach, including the beloved Brandenburg Concerto No. 3. In addition, the Bach Parley welcomes guest artist John Abberger, baroque oboe and oboe d’amore, from Toronto.

John Abberger, one of North America’s leading performers on historical oboes, is principal oboist with the performing group Tafelmusik. Abberger has performed extensively in North America, Europe and the Far East, and appears regularly with other prominent period-instrument ensembles, including the Philharmonia Baroque Orchestra, the Washington Bach Consort, the Portland Baroque Orchestra, Ensemble Voltaire, the Handel and Haydn Society, and Boston Baroque. He is also the artistic director of the Toronto Bach Festival, an organization dedicated to exploring the music of J. S. Bach and its context using historically accurate performing forces. John Abberger will play Bach’s Concerto in A major for oboe d’amore – the oboe of love – with the Bach Parley.

The Bach Parley will explore the vocal music of J. S. Bach with a pair of contrasting cantatas. Cantata 12 features soprano Carla Connors musically interweaving with elaborate baroque oboe solos by John Abberger. For Cantata 84, four singers, Anna Marie Friars, Phyllis Pancella, John Martin, and Jake Skipworth, will each sing a solo and also sing as a quartet. The words of the two cantatas show a contrast of emotion – Cantata 12 speaks of “Weeping, lamenting, worrying” while Cantata 84 proclaims “I will be content with my good fortune.”

This concert is the beginning of music director Valerie Arsenault’s 11th year leading the Bach Parley. The Bach Parley performs primarily on period instruments - harpsichord and baroque style stringed instruments with gut strings, and occasionally includes baroque vocalists as on this concert. The French word “parley” means discussion, and a key element of Bach Parley concerts is the commentary provided by Music Director Valerie Arsenault who gives historical context about the composers and offers suggestions about what to listen for in the music.

The Tallahassee Bach Parley is also the umbrella organization for a non- profit music school, The Bach Parley String Academy. In 2015, four teachers united to teach violin, viola, and cello at St. John’s Episcopal church, and now the String Academy has grown to six teachers, almost 100 students, and even offers ukulele classes.

At all Sunday Tallahassee Bach Parley concerts this season, patrons will receive an insert in their programs with a discount coupon to use after the concert at participating downtown area restaurants. A $10 donation is suggested, and free childcare will be offered.

Enjoy the music, the venue, and the magic of Baroque performance with the Tallahassee Bach Parley!

A $10 donation is suggested, and free childcare will be offered.