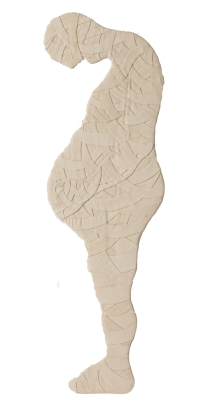 The Birth Project* surpasses in size and impact the last grand needlework masterpiece, the Bayeux Tapestry, done circa 1077.  The Birth Project, executed between 1980 and 1985, was stitched by 150 women needleworkers who joined artist Judy Chicago over a five year period to complete approximately 100 textiles for a series of “exhibition units.”   Chicago worked with needleworkers, providing underpaintings or drawings and written directions for the transformation of her images. One needleworker summed the process, “We are creating within Judy’s creation.”**  Every needleworker receives public credit for her work.

Judy Chicago’s images focused on “creativity” in female terms.  Her choice of subject afforded a vision seldom seen in western culture since the Neolithic, when woman embodied Creation itself as well as the many manifestations of individual creation –  human, plant, animal, or mineral.  Chicago wanted to reveal birth as both real and spiritual, and thus as a source of potent myth and symbol.

The Birth Project easily bypassed its medieval forebear in volume and color choice.   But the medium, associated since the Renaissance with craft, was returned by Chicago to its medieval status as an art medium.  With this series, as she had done in The Dinner Party, Chicago helped redefine the terms “art” and “craft” according to the intention of the artist.  For Chicago focus on skill determined the work as craft.  Focus on message determined the work as art.  The message of the Birth Projectwas, and is, revolutionary.  It was designed by Chicago, and is now “born again” in this exhibition, as a force for change artistically and culturally .

The exhibition at the Florida State University Museum of Fine Arts includes three types of Birth Project work:  a number of exhibition units with textiles; a series of preparatory drawings done by Chicago to develop imagery for the textiles; as well as a series of Birth Project images re-created by Chicago in print form.  Events surrounding this exhibition include: tours with the curator;  a panel discussion inclusive of an artist, an art historian, a mid-wife, and two sociologists; a teacher workshop; high school seminars; as well as an event for the visually impaired.

ParkMobile pay-to-park is available on the main and lower levels of the Call Street Garage. Visitors may park in any legal space after 5:00 p.m. on Thursdays and all day on Saturdays. Visitors to the Museum are encouraged to wear masks.