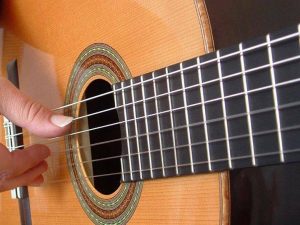 The Entrepreneurial Musician: A lecture by Patrece Robinson

Patrece Robinson, a Career Development Specialist and Arts Consultant who teaches at Stetson University will give a lecture as part of the Florida Guitar Festival starting at 5pm on Saturday October 7th.

Involved in the performing arts industry since 1980, Patrece Robinson has led a diverse career in academia, administration and the not-for- profit sectors. With extensive professional experience as educator, career adviser, performing arts presenter, artist representative, business manager, and success coach, she is dedicated to guiding individuals with their academic, artistic and career pursuits in developing sustainable careers. A frequent guest presenter, Patrece Robinson will join the faculty of the 2018 Volterra Project Summer Guitar Institute in Italy where she will lead lectures and individual sessions on the Business of Music. She has also served as keynote speaker at the Southern Entrepreneurship in the Arts Conference at the University of North Carolina-Greensboro, and as guest presenter at the Guitar Foundation of America’s Annual International Convention at the University of Louisville. As Adjunct Professor of Music at Stetson University from 2002 until her retirement in 2015, Robinson taught Career Skills for the Entrepreneurial Musician. Her many roles have included Administrative Director for the 2014 Sorrento, Italy GuitarFest, Fellow in the Coleman Foundation Entrepreneurship Program (2012-2014), Assistant Director of Stetson University’s Office of Career Development (2008-2013), Administrative Director for the Stetson University International Guitar Workshop (1991-2005), Director of the Stetson University Community School of the Arts (1993-1997) and Business Manager for Central Florida Cultural Endeavors, Inc. and the Florida International Festival, featuring the London Symphony Orchestra (2006-2007).