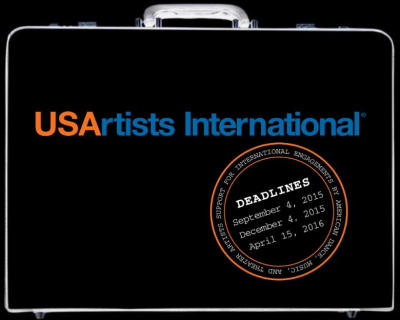 USArtists International (USAI) supports performances by American artists at important cultural festivals and arts marketplaces around the globe. Committed to the presence of US based artists on world stages, USArtists International provides grants to ensembles and individual performers in dance, music and theatre invited to perform at significant international festivals. USAI encourages and promotes the vibrant diversity of American artists and creative expression in the performing arts by expanding opportunity and exposure to international audiences, encouraging international cultural exchange, and enhancing creative and professional development of US based artists by providing connections with presenters, curators and artists around the world. USAI extends the reach and impact of professional artists dependent on touring for continued sustainability and career advancement.

USAI is open to American performing artists currently residing anywhere in the United States and its territories.

• be a dance, music or theater ensemble or solo artist, including practitioners of folk and traditional forms, that work at a professional level

• currently reside in the United States or its territories

• if a solo performer, be invited to perform as a soloist without accompaniment and be a U.S. citizen or permanent resident

• be invited for performances of no less than 20 minutes in duration, which may be comprised of single or multiple works or excerpts from longer pieces

• not have received a USAI grant within the calendar year, regardless of when the festival(s) or market(s) take place

• be sponsored or organized primarily by a non-U.S. based organization • be curated and require no registration, application, performance or any other type of fees from performers

• provide some support in the form of cash remuneration, paid or in-kind contributions, towards eligible project expenses as identified in the USAI guidelines under Grant Amounts and Eligible Expenses

• provide the applicant with a signed letter of invitation or signed contract to perform at the festival, stating the details of the festival’s financial or in-kind contributions towards eligible project expenses as identified in the USAI guidelines under Grant Amounts and Eligible Expenses Eligible Performing Arts Markets must:

• meet all festival eligibility requirements listed above with the exception that they do not need to be open and marketed to the general public.

• meet all festival eligibility requirements listed above with the exception that they do not need to be open and marketed to the general public.

Artists/Ensembles are limited to one application per program deadline, but may submit an application seeking support for participation with up to three festivals and/or markets as long as the artists/ensembles will not travel to and from the U.S. between engagements. Applicants must provide separate signed letters of invitation or signed contracts for each festival and/or market.

Grants will seldom cover the applicant’s eligible expenses in their entirety and generally range from $1,000 to $10,000. Grant requests may not be less than $1,000 and may not exceed $15,000. Eligible expenses supported through USAI are performance fees, travel, housing and per diem, shipping, visa fees, agents’ fees related to participation in the international engagement and fiscal sponsor administration fees, if applicable. Expenses not listed in the USAI budget are not eligible for support.