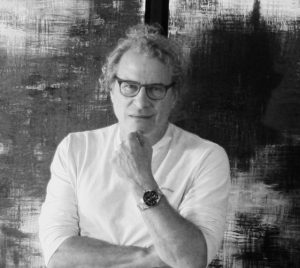 Robert Saltarelli is a artist who discovered a kinship with art after a long career in finance. His art reflects the places, people and events where he has traveled, including visits to many art centers of the world, as well as lesser known places that are nonetheless inspirational. This list includes New York City (where he still residents part-time), Seattle, Houston, Dallas, San Francisco, L.A., Paris, Leon, Le Havre, Berlin, Frankfurt, Milan, Melbourne, Singapore, Hong Kong, Mexico City, and Bogota to name a few.

In the 1970's, he was a member of the west-coast rock band named Blue Mountain Eagle. The band filled his evenings playing guitar, sax and flute. In those days, the band performed 60+ shows a year, including opening for the English rockers Slade. He can now often be found in his Railroad Square Tallahassee studio, where he displays over 30 of his many finished works, as well as those in process. Two of his larger paintings can be viewed in the lobby of the Tallahassee Hyatt House Hotel where they are on permanent display, housed in a dividing wall which he also designed.

Robert holds degrees from Seattle University and Columbia University. Although neither of the degrees relate to art, they both led to experiences that are visible in his art and creativity.