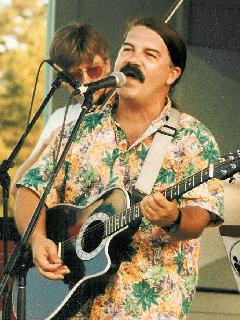 Del Suggs is a singer/songwriter and guitarist from the beaches of North Florida. He has appeared in concert at colleges, universities and festivals across the United States and the Caribbean. Del has appeared at over 700 colleges and universities across the US.  He's also performed at such prestigious venues as the World Music Festa (Shirahama, Japan), Kerrville Folk Festival (TX), Spirit Square (NC), Lyric Theatre (FL), Sarasota Opera House (FL).  Del has appeared at the Florida Folk Festival every year since 1983.

In 2016,  "Campus Activities" magazine named Del one of the "Top Five Artists of the past 25 years," an honor recognizing his lengthy career and continuing popularity.

Del is considered by many to be one of the founders and pioneers of "Trop Rock" (tropical rock) music.  This popular genre is rightfully credited to Jimmy Buffett.  Del began to perform in a similar style which he called "Saltwater Music," drawing on his experiences growing up along the Gulf Coast in Panama City, Florida.  Del has a chapter featured in the book "Trop Rock Songs: Stories and Tales" by Andy Forsyth (2011).  His songs have been covered by other trop rock artists such as John Reno ("Magic Chair," "Break in the Weather,"  and "Billy" co-written with Pierce Pettis),  and other recording artists Carol Ann Mathews, Tammerlin, and more.

Del has been a voting member of the National Academy of Recording Arts and Sciences (the Grammy Awards) since 1992, with the release of his first CD.