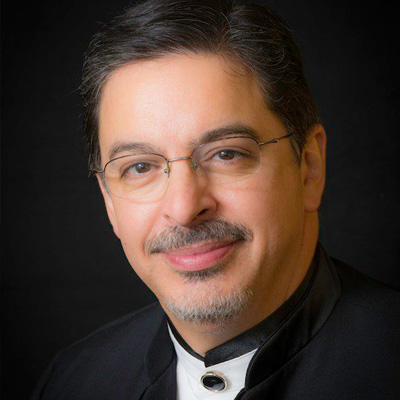 A conductor and pedagogue, Alexander Jiménez serves as professor of conducting and director of orchestral studies at the Florida State University College of Music, one of the leading music programs in the United States. Under his direction the University Orchestras have become recognized among the most important orchestral training programs in the U.S.

A dynamic and versatile podium presence, Jiménez has appeared with orchestras throughout the United States and in Europe, including engagements in Belgium, Austria, the Czech Republic, Israel, and Italy. Under his direction the FSU Orchestras have continued their long tradition of excellence. Both the University Philharmonia and the University Symphony Orchestra (USO) under Dr. Jiménez have championed new music and collaborated with such composers as Krzysztof Penderecki, John Harbison, Martin Bresnick, Jeff Beal, Anthony Iannaconne, Christopher Theofanidis, Ellen Taafe Zwilich, Chen Yi, Zhou Long, and Ladislav Kubik. In 2007 the USO was featured in the PBS special Peanuts Gallery® which was awarded Best Performance of 2007 by the National Educational Telecommunications Association. Dr. Jiménez has premiered new works with the University Orchestras, including the world premieres of The General by Emmy Award-winning composer Jeff Beal, the Piano Concerto No. 3 by Ladislav Kubik (Jiménez led the world-premiere recording of this work with the Brno Philharmonic), Trumpeting the Stone by Brent Michael Davids, and Alma by Harold Schiffman. Jiménez has recorded with the Mark, CBC/Ovation, Col Legno, Neos, and Naxos labels. Of the USO’s 2010 recording on Naxos of Zwilich’s works for piano and orchestra, Lynn René Bayley of Fanfare stated that “Alexander Jiménez and the Florida State Symphony, who premiered the Peanuts Gallery, perform all three works here with tremendous sympathy, love, and excitement.”  David Hurwitz, writing for ClassicsToday.com, exclaimed “…the Florida State University Symphony Orchestra under Alexander Jiménez leaves absolutely nothing to be desired.” In 2014 Naxos released the USO’s  recording of the Dohnányi Symphony No. 2 and the world-premiere recording of Dohnányi’s Two Songs for Baritone and Orchestra. Dr. Jiménez has accompanied many of the world’s leading artists covering a wide variety of genres, including Lynn Harrell, Denyce Graves, Christopher O’Reily, jazz great Marcus Roberts, the Canadian Brass, Scotty Barnhart, and Joshua Bell.

A highly-respected educator, Jiménez is in demand as a guest conductor, teacher, and adjudicator with youth orchestras and adjudication panels throughout the United States and Europe. Since 2009 he has served on the international jury panel of the European Festival of Music for Young People in Neerpelt, Belgium, and in 2013 was named International Festival Ambassador.  From 2010-2012 he served as president of the College Orchestra Directors Association and since 2000 he has served as music director of the Tallahassee Youth Orchestras. Jiménez is the recipient of a Florida State University Teaching Award and has been nominated for the Distinguished Teaching Award.