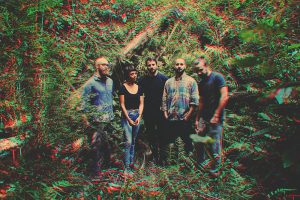 Bees and Enormous Tigers (BAET) was founded in 2012 by Tallahassee twins Alex and Peter Koenig. Their music is indie heart meets buzz-saw hardcore. They balance bold, experimental soundscapes with screeching, wailing, thick, swirly guitar tones, driving drums, and dystopian lyricism. They construct city walls and deep ravines of sonic ambiance only to destroy and deconstruct the conventions of mind and music.

“Don’t let the word “debut” fool you – Bees and Enormous Tigers […] are no strangers to the music scene. Their first single release finds the band letting their evolved sound shine through, as “Get Home Safe” is a track that has existed as an anthem in the local Tallahassee music scene for years. “

“…Bees and Enormous Tigers’ performance was a full-blown stampede. The Tallahassee, Fla., trio… brought songs like “Get Home Safe,” whose thunderous drumming literally shook the room as they played…True to form, these three were off-kilter; loud; and absolutely perfect for the dark, smoky stage of JJ’s.”

“The local music group, BAET (Bees And Enormous Tigers) was the last act of the event. …the music consisted of an intriguing concoction of experimental and hard rock. However, the band relied less on electronic samples and more on the outstanding power of the group’s drummer. Intricate guitar melodies matched the complexity of the drum parts to make for a truly invigorating and nearly hypnotic experience. The show ended with the drummer of Chew joining the group on another drum set for the last three songs, which resulted in a rhythmic force of monumental proportions.
After playing a wildly robust final song, some members of the audience remained standing in astonishment while others started to leave the gallery.”

“Bees and Enormous Tigers, a.k.a. BAET, of Tallahassee, followed with a luscious experimental rock set, tinged with infusions of post-metal and grunge. Deep dramatic vocals served as an accompaniment to the intricate instrumental patterns rather than assuming priority. Taking in BAET’s echoing riffs, rapid, powerful basslines and clanging drums, as the band toyed with different decibel and speed dynamics, I could only imagine how it would all be enhanced at a venue with some real acoustics. Their energy and potency of sound seemed to intensify throughout the set.”