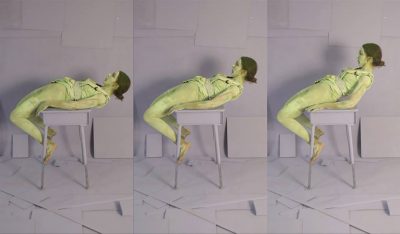 Brittany M. Watkins is an interdisciplinary artist. She was born and raised in Carrollton, Georgia where she received a Bachelor’s Degree in Fine Art from the University of West Georgia. After being awarded the Art Study Abroad Scholarship, she traveled to Bayeux, Caen, St.Malo, and Paris, France, where she studied advanced watercolors. It was during this time abroad that she first experienced strange visions similar to a dream; she witnessed herself from afar. These third-person introspections proved to be artworks in their own right, leading to a shift away from sculptural ceramics and into video and performance. Brittany has since won awards in both Georgia and Florida for her video and installation work. She received the first ever Juror’s Choice Award in the Annual Juried Student Exhibition at the Bobick Gallery for her video, Sleep Away the Day Little Girl, in 2011. She was given a sculpture area award in 2015 as well as the Jim Boone Endowed Art Scholarship in 2016 while receiving her Master’s Degree in Studio Art from Florida State University. As an exhibiting artist, Brittany has shown work in variety of settings ranging from fine art galleries and experimental spaces to The Museum of Fine Arts in Tallahassee, Florida and the international contemporary art fair Aqua Art Miami. Brittany was instrumental establishing an experimental, artist-run space in Tallahassee, FL where she exhibited as the first resident artist and went on to curate the show entitled: “Background Noise” in August of this year. Brittany is currently living and working as a full time artist in Tallahassee while she seeks various opportunities around the world.