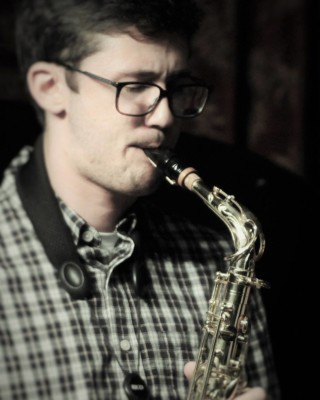 Multi-instrumentalist Kalen Mercer preaches his message to the audience through his challenging compositions. With his band, Kalen Mercer and the Mercernaries, he creates energetic and electric soundscapes. He has regularly worked with artists and groups such as Adam Hendley’s Urban Soul, Tyler Lee (of Fungle Junk), and Sway Jah Vu. He has also performed with the Tallahassee Symphony Orchestra Jazz, Heather Gillis, Chilled Monkey Brains, and Bobby Foster and the Aristocats. Kalen's music has been broadcasted live on WVFS 89.7 Tallahassee and WCOT City of Tallahassee. He has appeared at venues such as Side Bar Theatre, Rio Carabelle, Backwoods Bistro, Nefetari’s Fine Cuisine & Spirits, Level 8 Lounge, and the Oglesby Union Amphitheatre. Born in Kansas City, Kansas, he has spent most of his life in Central Florida. He learned to walk by dancing to the music of Celine Dion and was given a guitar at the age of 4. He continued to learn music and joined the middle school band, where he was introduced to clarinet and, a year later, saxophone at the age of 14. In his formative years he participated in All-County and All-State bands and his local church’s music ministry. As a senior in high school he won the prestigious Louis Armstrong Award. He attends Florida State University, where he studies with William Kennedy. Kalen will finish his Bachelor of Arts degree with an emphasis on Jazz Studies in May 2016. He plays funk, jazz, pop, and soul music frequently around Tallahassee, FL and neighboring cities and states on saxophone, clarinet, flute, and keyboards.