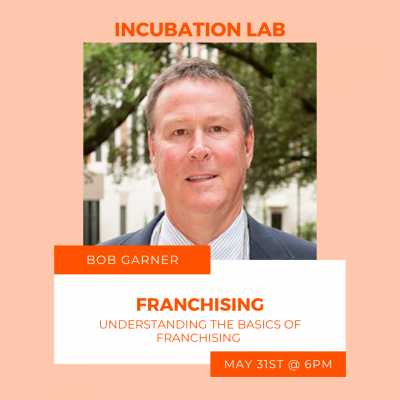 Join Bob Garner for a presentation on Franchising Tuesday, May 31st @ 6 PM. Our program participants will be learning the basics of franchising and how to choose the best franchise for you.

Bob Garner graduated from Florida State University with a degree in management. He spent 12 years with Roadway Express holding positions as Operations Manager in Valdosta Georgia, Driver Superintendent in Miami Florida, Assistant Manager in Atlanta Georgia, and Terminal Manager in Montgomery Alabama. In June of 1994 Garner opened a Hardee’s Restaurants in Warren, Arkansas. He went on to open two more units and operated them until 1999. After moving back to Tallahassee, Garner completed his MBA at Florida State and began teaching at Flagler College Tallahassee until being hired at FSU in 2013. He teaches in the Jim Moran College of Entrepreneurship and his interests include managing growth, negotiations, and franchising.