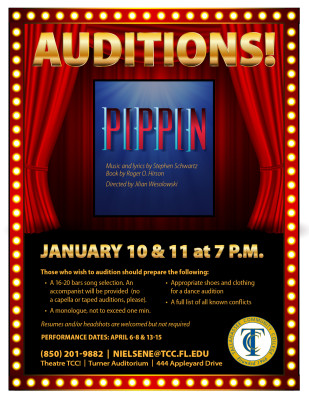 Auditions for “Pippin”
Tuesday, January 10 and Wednesday, January 11 at 7:00 p.m.
at TCC’s Turner Auditorium
(Callbacks, by invitation only, will be held on January 12)

Those who wish to audition should prepare the following:
• A 16-20 bars song selection. An accompanist will be provided (no a capella or taped auditions, please). Have all music marked and ready to play.
• A monologue, not to exceed one minute
• Appropriate shoes and clothing for a dance audition
• A full list of all known conflicts
• Resumes and/or headshots are welcomed but not required

ABOUT THE SHOW:
Heir to the Frankish throne, the young prince Pippin is at a crossroads in his life. Does he follow in the footsteps of his father, one of the most powerful men in the land? Or does he strike out on his own, to find his own “corner of the sky?” With an infectiously unforgettable score from the four-time Grammy-winner, three-time Oscar-winner, and musical theatre giant Stephen Schwartz (“Wicked,” “Godspell,” “Children of Eden”), “Pippin” reminds us that true happiness may be found in the ordinary moments that happen every day.