Audition for Lend Me a Tenor 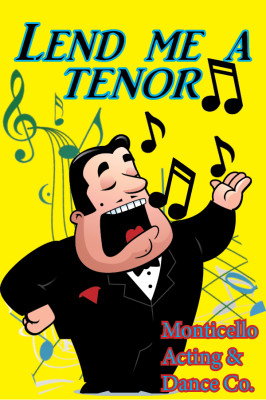 AUDITION
Lend Me A Tenor directed by Melanie Mays, Asst Dir. Brenda Gibbs
Produced by Monticello Acting & Dance Co. (MadCo)
Sunday, October 2 at 6:30 pm
MadCo Studios, 262 N. Cherry Street, Monticello, FL
The roles of Julia, Maria, and Tito Merilli are cast.
You will be asked to read from the script. If it is a singing role-Bellhop and Max, please bring music in your key. Operatic music preferred.
If you can’t audition at the time listed above, respond to this post to schedule an audition day/time.
Short rehearsal period, end of November and December.
Show Run: January 13-29 weekends at the Monticello Opera House

Available Roles:
Max: (20’s – 30’s) Assistant to Mr. Saunders, owner of the Cleveland Grand Opera Company. He is in charge of “babysitting” the unpredictable Tito Merelli (Il Stupendo), a great Italian opera singer who is engaged to perform in the opera this evening. Max
must make sure Tito gets to the concert. A bit of a nerd, an opera lover, and an aspiring singer, Max would like to have more courage and more confidence. He is in love with Maggie. NOTE: MUST SING

Maggie: (20’s – 30’s) Pretty and quirky, Maggie is the daughter of Saunders and a music lover. She longs for an adventurous fling, one which will allow her to “hear bells,” before settling down. She is, for now, refusing to marry Max

Saunders: (40’s – 50’s) Maggie’s father and the general Manager of the Cleveland Grand Opera Company. An authoritarian, uptight man with a short fuse, most of which he takes out on Max. A man under pressure.

Bellhop: (age open) A hotel bellhop and highly energetic fan of Tito’s, who uses his occupation to get close to the international star. NOTE: NOTE: MUST SING

Diana: (late 20’s – 30’s) A soprano with the Cleveland Grand Opera Company. A beautiful and sexy member of the opera company, Diana has been “flinging her way through the whole cast.” Playing Desdemona opposite Tito, she thinks that he might be her ticket out of Cleveland into the big time